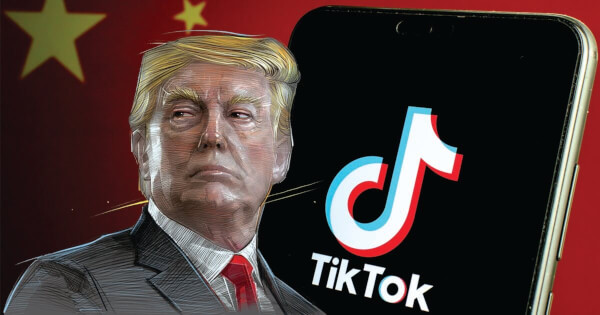 After weeks of President Trump and United States officials expressing concern that data from TikTok’s users in the US is being shared with the Chinese Communist Party, the White House has finally issued an executive order against the app, in addition to a second order for China-based WeChat.

US President Trump and government officials have expressed serious concerns that TikTok, which is wholly owned by Chinese firm ByteDance, is being used to collect the personal data of 80 million Americans. While TikTok representatives have denied these allegations that it shares information or it is influenced by the Chinese Government it has done little to satisfy President Trump, as evidenced by the executive orders yesterday.

According to the official White House release, the executive orders against TikTok and WeChat will take effect in 45 days. The orders will prohibit any US company or person from transacting with TikTok’s parent company ByteDance, which would most likely see the popular video social app banned from both Apple and Google’s app stores and make advertising on the app illegal regardless of where it is hosted.

The executive order against TikTok reads, “This data collection threatens to allow the Chinese Communist Party access to Americans’ personal and proprietary information — potentially allowing China to track the locations of Federal employees and contractors, build dossiers of personal information for blackmail, and conduct corporate espionage.”

Is the Microsoft Deal Still on?

President Trump recently began to push the idea of TikTok being bought out by a US company and even set a deadline of September 15 for the deal to take place. Trump also insisted that if the sale of TikTok did occur he expected, “a very substantial portion of the price is going to have come through the Treasury of the United States.” Trump added, “The United States should be reimbursed or paid because without the United States they don’t have anything.”

Microsoft has become the frontrunner in the race to acquire the highly profitable TikTok App’s US Services. The deal could also see Microsoft reshape the landscape of social media as it would give them a new competitive advantage over the other social media giants like Facebook, Google and YouTube.

Microsoft confirmed that they are in discussions to buy TikTok’s operations in the United States as well as Canada, Australia, and New Zealand on August 3. The technology giant has been engaging with the White House on the deal that should be completed by September 15.

Microsoft CEO, Satya Nadella has been in discussions with President Trump on the likely acquisition of TikTok—pledging to add more security and digital protections for American data acquired by the Chinese social video app.

“Microsoft fully appreciates the importance of addressing the President’s concerns,” a statement from the company said, “It is committed to acquiring TikTok subject to a complete security review and providing proper economic benefits to the United States, including the United States Treasury.”

While Trump seems to be open to this idea, many experts believe that Trump’s real goal with the executive order is to force ByteDance to divest its US operations, and is largely motivated by the escalating US-China trade tensions and alleged China COVID-19 cover-up.

TikTok is undoubtedly one of the most popular apps in the world, boasting more than 2 billion downloads, with over 150 million of those occurring in the United States. ByteDance is allegedly prepared to sell 100% of TikTok’s US operations as a way to appease President Trump and keep TikTok on the global stage, which has prompted Microsoft acquisition discussions.

While Microsoft looks to step in, Block.one appears to be looking to scoop up the 80 million Gen Z dominant US subscribers of TikTok in a way that could see incredible gains for Bitcoin and the cryptocurrency market.

Block.one have created their own social media platform called Voice, which aims to bring alignment and transparency to social media. Representatives have been citing concerns with TikTok privacy as a reason to move to the decentralized Block.one alternative.

Blockchain.News reached out for comment from Block.One representatives, who declined to comment on the speculation but said they were monitoring the situation with TikTok.

The Great Firewall of the USA

As reported by Blockchain.News on August 6, Mike Pompeo, Secretary of State for the Trump administration has announced the launch of the expansion of the Clean Network program, outlining five new lines of defense to protect America’s critical telecommunications and technology infrastructure from untrusted Chinese state-owned enterprises like Huawei and ZTE.

The Clean Network program is the latest initiative in the Trump Administrations' war on China’s tech invasion. The five-pronged approach aims to enhance the safeguarding of United States data and sensitive information from aggressive attacks and intrusions by the Chinese Communist Party (CCP) through state-owned enterprise actors.

The Trump Administration’s scrutiny of China’s tech firms and their services operating in the United States has been well documented in recent weeks as TikTok, the Chinese social media app has come under fire for alleged data sharing with the Chinese Communist Party, an allegation that parent company ByteDance Ltd has strongly denied.

Currently, over 30% of the world’s smartphone sales come from Chinese vendors Huawei, Xiaomi and Oppo. The tech firms so far have been able to enjoy a relatively open mobile ecosystem, in which consumers in most countries can freely access the likes of Google, Instagram, and WhatsApp.

The Clean Network program aims to flush out any transmission, control, computing, or storage equipment from untrusted IT vendors, such as Huawei and ZTE, which US Secretary of State, Mike Pompeo asserted are “required to comply with directives of the Chinese Communist Party."

The Clean Network program could serve as a firewall internationally against Chinese cyber infiltration. The initiative extends to a coalition of like-minded free countries and companies aiming to secure their critical telecommunications, cloud, data analytics, mobile apps, Internet of Things, and 5G technologies from malign actors. As announced on April 29, 2020, the 5G Clean Path will rely on only trusted telecommunications and technology vendors who are not subject to unjust or extra-judicial control by authoritarian governments, specifically China.

The initiative is strongly supported by free nations as China has increasingly come under fire for cyberattacks worldwide against other sovereign nations and intellectual property theft.