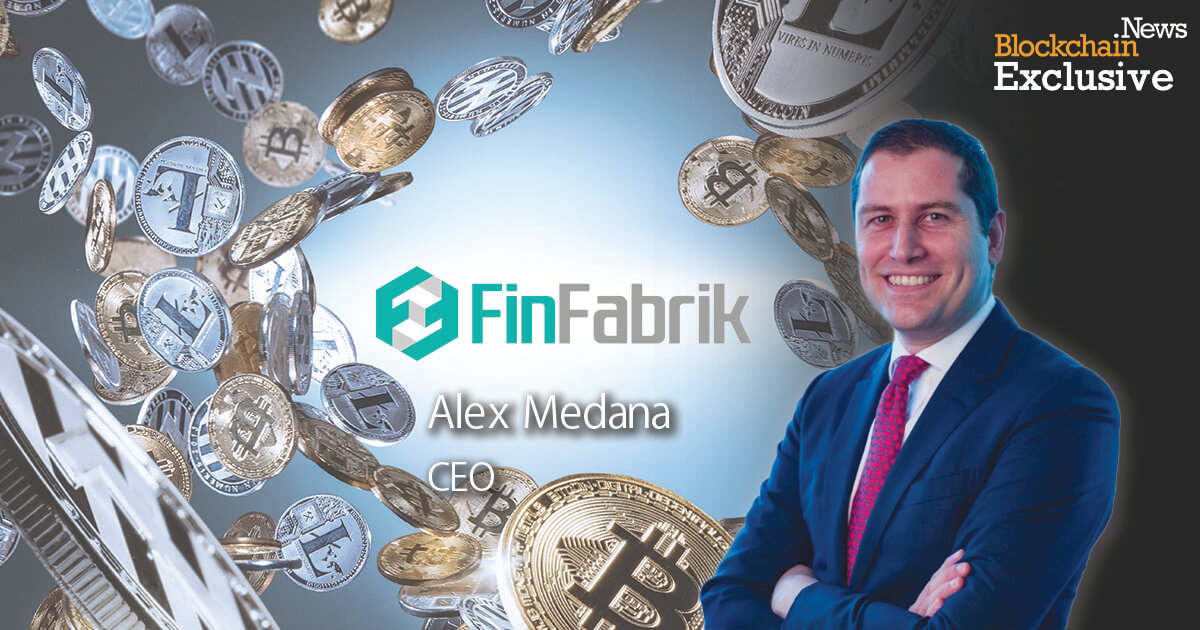 With extensive experience in the financial industry and entrepreneurship, Alex Medana, the CEO of FinFabrik, talks about the core values of FinFabrik in the maturing DLT and FinTech industry and the firm’s digital assets issuance and investment platform CrossPool. “We took the decision to go into permissioned distributed ledger technology from the beginning because financial institutions and regulators favor privacy. Last year was a big year for us to become Corda Enterprise licensee and that showed we had the same baseline capabilities as major banks,” said Medana.

Medana explained that CrossPool had been conceived as a multi-digital assets platform first but that the focus in 2020 is in private credit markets. The firm has recently delivered three proof of concepts, digitalizing a secured and an unsecured loan to SMEs and equity participation into a movie production - the Algerian-French progressive movie “Papicha” that has just won two Cesar awards. The idea behind CrossPool is to enable institutions in private markets to digitalize assets, their proof of ownership, and the identity of the owners in an end-to-end workflow that encompasses contract and identity management, issuance, book-building, subscriptions, payments & settlements, secondary trading.

While blockchain and distributed ledger technology (DLT) and their business applications remain at an early stage pending on mass adoption from institutions, the coronavirus pandemic has wreaked havoc in this thriving sector.

Collaboration over competition amid the coronavirus outbreak

Since the Lunar New Year in late January and despite a solid pipeline, the company growth has been hurt by a general slowdown brought by the pandemic.

“Firstly, being an entrepreneur is the most impossible thing you can do in normal times: it’s a never-ending uphill battle on a constantly shifting landscape. You can’t do it on your own and it’s a fight every day even more so than ever due to the black swan situation we are in.. I would say the most important thing, that I took from my martial arts practice, is to never worry, always be ready to fight,” said Medana. “Be ready for any opportunities because it’s a rollercoaster.”

Regarding the company’s strong will to stay above water during the crisis, Medana explained, “We are a technology enabler for institutions that are licensed, have assets (supply) and clients (demand), and their fundamental requirements to reduce their costs and risks have not changed. They need us more than ever to digitalize their operations..”

During these times, Medana observed the disappearance of the financial institutions which are putting their business continuity plans (BCP) into effect. This comes as no surprise to him, having executed a few BCP situations in his 16 years experience in banking, including a bomb scare in London, “When you have a BCP situation, you do the minimum. You don’t dive into new projects, you park current ones and any innovation is seen more than ever for the future. That is the reality we are facing, but it’s not just us.”

Currently, investors have been taking more time with their decisions, and processes have slowed down, which means there is an impact on cash flow, on companies’ survival and that is a situation shared by many start-ups out there, according to Medana. “We look for the community to help one other. That’s very important right now and to help the community you have to give first before you take. Although giving before taking might not be possible for most start-ups” Medana is a founding member of Hong Kong FinTech Association, he values reciprocity in a growing and currently struggling industry. FinFabrik is an R&D driven firm based in Hong Kong and continues to see huge potentials in Asia compared to the rest of the world irrespective of the virus outburst. It has a second entity in Shenzhen, China, which is well situated in the Greater Bay Area, where the company has received a fair amount of interest in some collaboration projects from regulated government bodies. He once again underscored the urgency for tighter collaboration, rather than competition, in this early blockchain ecosystem.

Blockchain and DLT: It’s all about data and truth

With the emergence of new disruptive technology, Medana emphasized the need for data points that can be trusted. “At a very basic level, we don’t trust each other as humans hence the existence of regulations and controls. Blockchain and distributed ledger technology have fascinated me since I have discovered them 5 years ago because they are all about recording a state and its subsequent evolution. The data points that are timestamped using these technologies cannot be tampered, reversed, or denied and to me, they are key to delivering trust and truth between parties.

Upon a conscious selection of permissioned DLT from the get-go, Medana explained the rationale of such adoption, “the level of information asymmetry remains an important consideration in the private market investments between parties who wish to keep certain datapoints bilateral and not public. What we have built allows our customers to decide who sees what and when. The data that rides on this new architecture is standardized and transparent for the participants at any point in the asset lifecycle: from contract issuance, subscription, payments, settlement to the secondary market,” said Medana.

Technology is not a disrupter. Medana firmly believes that technology is a future-proofing enabler, “we are not here to disrupt. I want to emphasize that we look at using technology to overhaul the mundane, highly repetitive, manual, and often error-prone works that many of the traditional financial industry still have because data is all over the place in many different systems with their own limitations.

In the long term, those institutions that haven’t invested in technology will be disrupted whilst others will be exploring new areas; for example, a custodian could become the trust giver of identity.

The flagship product of FinFabrik, CrossPool is built for institutions in private markets to serve their institutional and professional clients with a strong focus on the operational processes. The market infrastructure handles issuance, transaction, and settlements of digital assets with increased and configurable levels of data privacy and security. The firm has taken over a year to build out this modular market infrastructure, on top of its multi-asset trading technology stack.

“CrossPool’s meaning is about cross-chains, cross-assets, cross-exchanges, and its aim is to become a meta infrastructure,” said Medana, “30% to 50% of operation costs could be reduced as a result, and ideally, the business can re-invest that for growth; it also greatly reduces risks and amongst other things time associated with clearing and settlement. As a lot of large consulting firms have forecasted and our conversations with the industry, “in the future, there will be fewer intermediaries, processes will be quicker and assets more liquid but to get there, we need an interoperable network, that’s what we’re building towards for.”

When you reduce intrinsic costs, lack of scale, and illiquidity discounts, there should be a premium compared to today” he suggested.

Medana is very careful about the distinction between digitization and digitalization, two words that are used almost interchangeably by many. Digitization is when information is transferred from analog to a digital format, and digitalization is the use of digital technologies to transform how processes are done and make them digital-first.

Digitization is not end-to-end, so there are many inefficiencies baked in, such as errors, exceptions, rework and digitized processes lack the flexibility to scale. Over a typical private market transaction, there are over 40 steps, on average 12 intermediaries and 6 or more applications (one of which is the famous Excel spreadsheet) and systems. “What we have built and are building is end-to-end digitalization from the inception of an asset. Because the assets and workflows are digital, it will be possible for investors to build and rebalance portfolios on the fly. Of course, this will take time to be achieved at a broader market level.

With the high costs in the conventional processes of deal structuring, Medana cited the example of contract preparation by lawyers and his hypothesis is that most of the work can be standardized digitally: “imagine if a contract is standardized, lawyers can spend fewer man-hours on paperwork and bill for actual work. They are able to do more with fewer resources because the negotiation can be also done digitally with mark-up language with the finalized version recorded on a distributed ledger.

Ricardian contracts were created by Ian Grigg in 1996, as a way to register a legally valid document with an added element of digital connection to a certain object or value. The objective of a Ricardian contract is to place all information from the traditional legal document format into a format that could be executed by software. A Ricardian contract could be read by both humans and machines. The contract integrates with a digital infrastructure for higher security with cryptographic identification.

“I want to stress the point that a Ricardian contract is human and machine-readable, and it is fully digitalized which means that you can print it as a pdf if you want but more importantly that its key components can be used for automating processes using smart contracts for example dividends payments, auto-rollovers, etc. Our platform auto-populates the buyer/seller, price, quantity, and security name fields reducing any human error to zero.

In 2020, we still have no dispute resolution around blockchain-based contractual agreements anywhere in the world, at least not that I am aware of. As said before, the data recorded on a blockchain/DLT is immutable, irreversible, and tamper-proof and those qualities are attractive to increase trust between two parties.

Another stream of development on the digitalization of alternative real assets has gained popularity within the digital community. These are the more funky assets like wine, real estate, art, and collectibles, amongst others. The digitalization of real assets is a global phenomenon, with digital transformation expected to have a huge impact on these industries. “Real assets are unlike financial assets, there is not a lot of regulation around them and people tend to attach more emotions to them, that’s why we are seeing more advances and incoming enquiries in this field,” explained Medana. “What I’ve observed is that financial institutions are two or three years away before doing anything major. We’ve seen more movement coming from asset owners, exchanges, and smaller firms.”

Medana further added that the firm is working on a few interesting use cases, helping asset owners to build their marketplaces. I believe that banks will be drawn to this new asset class, driven by digital banks.”